Haarlem, 9 April 2022 – Arthur ten Wolde connects a military model that has predicted the onset of a world war around 2020 with global models describing an upcoming total system crisis around 2030 – including climate change and Covid-19, and ends with a message of hope

Today I learned something baffling from a Dutch podcast about the Ukraine war and crisis in Russia [1]: According to scientific calculations in his Ph.D. thesis and book (2020) [2,3], Ingo Piepers, former commander of the Dutch part of the United Nations Rapid Reaction Force to end the war in Bosnia (1992-1995), a “comprehensive systemic crisis, combined with acts of war, will occur around 2020 – two years earlier or later. This systemic crisis will lead to a completely new European and global system of states. That transition will take about seventeen years.”

The outcome of his model calculations is shown in the figure above. it shows a fifth war cycle with a 75-year relatively stable period ending in 2020. He explains that his model is statistical and cannot predict individual events for individual events or wars, but it can predict global ones – assuming it is accurate and can be extrapolated into the future. Driving force behind this cycle is the rise of China and India.

This would of course be extremely bad news. Is the Ukraine war the beginning of a third world war? Piepers can’t tell of course if this is the case, but based on his model and the current situation, the invasion of Taiwan by China before 2030 is highly likely, and would create a world war according to the definition in his thesis. For me, this means all the more that we should hope for the best, but plan for the worst.

But is Piepers’ model not neglecting the theory of Spiral Dynamics [5]? This could very well be, and for me is one of the sources of hope for a better scenario. After all, his model is based on 500 years of global history during which the value systems of people and nations went through a series of transitions: from tribal, to power-based (military), via order-based (rule of law) and entrepreneurial (capitalism, democracy) towards green thinking (social and environmental). However, after 75 years, less than half of the worlds’ nation states has succeeded in creating a stable democracy. This is why we now see a “war of values” between two blocks of nations, with autocratic regimes competing with democracies. Moreover, now that the Ukraine war has triggered a refugee, food and economic crisis, the life situation of millions of citizens can be quickly be reduced to poverty, hunger and misery. Their values will then shift accordingly down the Spiral, and the votes of people living in democracies could rapidly shift towards parties asking for strong political leadership – like populist parties. This could in turn topple democracies – including the United States – into autocracies and increase the chances or armed conflicts. So no, we cannot yet say if Piepers model contradicts Spiral Dynamics – that remains to be seen.

Piepers also mentions climate change – and rightly so. Because the recent reports of the International Panel on Climate Change predict a global climate crisis that becomes inevitable before 2030 unless immediate, bold action is taken to fundamentally change our economic system into a sustainable one [6].

What strikes me is that I see a link with the Business-As-Usual (BAU) scenario from the World-3 model [7] of the Club of Rome, which forms the most important driver for me to work on accelerating and mainstreaming the circular economy: 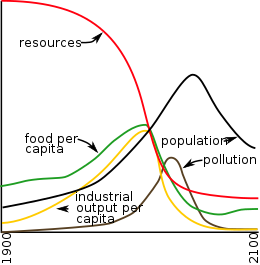 This economic model from 1972 predicted, in a scenario that has recently been confirmed [8], a global systems crisis with “overshoot and collapse” of our global socio-economic system around 2030. The model that was developed by MIT (the Massachusetts Institute of Technology) is extremely general, in fact so general that it does not explicitly mention climate change or pandemics such as Covid-19. Instead, such factors are effectively included under the header “pollution” which is coupled to the depletion of global stocks such as natural resources – rain forests, biodiversity, fertile land, wood, minerals, oil, etc. Climate change has since been separately modelled with great precision as reported by the IPCC [6]. The World-3 model also includes technological innovation, and shows that hoping for a “techno-fix” is a dangerous illusion. The only way to avert collapse of our civilisation around 2030 is to radically change our socio-economic system into a sustainable one before it is too late.

But the World-3 model does not include geopolitical factors. It is only in the discussions about the outcomes of various scenario runs that the potential for wars to fight for ever scarcer natural resources becomes obvious. This is where Piepers’ model comes now into place. It adds to the World-3 model a scientific analysis of these geopolitical forces, explains why war has hit Europe now, and makes the scenario of escalation into a world war before 2030 quite probable.

A message of hope

Recent events are depressing. The feeling of progress has left and made way to feelings of decline and fear for what the future holds. However, what I notice is that every crisis has strengthened the sustainability agenda: the earthquakes from natural gas fields in the Netherlands, the Covid-19 pandemic, the Ukraine war. Frans Timmermans, vice president of the European Commission, has been effectively absorbing these shocks by amplifying his European Green Deal. For example, Europe will now accelerate the phase-out of natural gas in order to become independent of Russian gas. This gives me a lot of hope because my work on sustainability has learned me that political support for the transition will only occur if things go almost wrong. And that humanity’s capacity to rapidly adapt and innovate can grow exponentially just like our problems, so that we can still turn the tide: “yes, we can”. So my message of hope is: it will go right because it almost goes wrong. If we take drastic measures soon by showing individual leadership.

The scientific model of Ingo Piepers predicts the onset of what could become a world war around 2020. It may already have begun. His model does not seem to contradict Spiral Dynamics. It adds the geopolitical dimension to the World-3 model of the Club of Rome and the climate models of the IPCC. Together, they predict a global socio-economic crisis between 2020 – 2040 that will then lead to a new world order. Drastic measures are needed to avert the next world war and a global socio-economic collapse between now and 2030.

Based on this, to prevent a global systems crisis, my recommendations are the following:

Arthur ten Wolde is the Owner and Head of Circular Future

[3] Ingo Piepers, ‘The inevitability of a new world war’, Prometheus Publishers Amsterdam 2020. This book is a continuation of Piepers’ PhD thesis ‘Dynamics and development of the international system: a complexity perspective’ (2006), ‘Warning. Patterns in War Dynamics Reveal Disturbing Developments’ (2016) and from his study ‘On the Thermodynamics of War and Social Evolution’ (2019). https://uitgeverijprometheus.nl/catalogus/de-onvermijdelijkheid-van-een-nieuwe-wereldoorlog-2.html

[5] For an explanation of Spiral Dynamics see http://circular-future.eu/?page_id=554

[7] World-3 Model of the Club of Rome, https://nl.wikipedia.org/wiki/World3-model

2 thoughts on “How to prevent a global system crisis”