Arthur has strengthened the Dutch advocacy for a circular economy for the European Alliance of Circular Economy Solutions (ACES) funded by MAVA through the UK Green Alliance (2015-2017). He was responsible for the lobby objectives for the circular economy of De Groene Zaak and participated in decisive meetings and conferences. The Dutch Government launched an ambitious Circular Economy Program at the end of 2016. 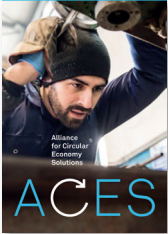