Posted on November 30, 2016 in Dutch on Duurzaam Ondernemen

Almost everyone knows Airbnb, Spotify and Uber as examples of the “sharing economy”. But is sharing part of the “circular economy” or not? Sharing platforms can significantly reduce the use of raw materials. Governments should encourage and regulate sharing platforms as part of the circular economy, and should cease to oppose or even ban them. Arthur ten Wolde (owner of Circular Future) has about a clear vision. 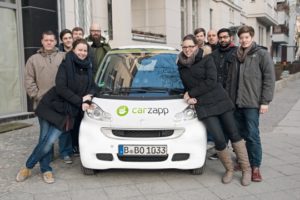 Many people have heard of the sharing economy. Almost everyone knows the examples of Airbnb, Spotify and Uber. And the term “circular economy” is becoming more widely known as well, especially in the Netherlands with the recent launch of an ambitious Government-wide Program for a Circular Economy and a Resource Covenant. But is the sharing economy part of the circular economy? Or is the latter only about recycling?

The sharing economy is about sharing goods, services, space and mobility, amongst others. The core idea is that we can use our assets (from your backpack to company machinery) so much better that it allows for a whole new economy. Existing platforms use different organisational forms such as peer-to-peer (Airbnb, Uber), cooperatives (Peerby), peer-to-business-to-peer(ParkFlyRent), and business-to-business (Floow2). They use all possible forms of trade: buy, rent, lend, give, exchange, share. Successful platforms use web technology via a disruptive business model that competes fiercely with incumbents such as taxis and hotels. Taxi drivers have protested over the world against Uber, as it transports people without paying for a license. In response, Berlin banned Uber and Airbnb.

Many discussions on the circular economy concern recycling. But the circular economy is mainly about the prevention of waste in the environment. This can be done by e.g. life extension, improved maintenance and repair, and reuse of products and materials. All this calls for a chain-oriented redesign of services and of production, distribution and collection of goods.

The sharing of goods can certainly contribute to this. Lots of goods ‘lie still’ to be disposed of sooner or later, while only a fraction of the possible number of hours of use is utilised. For example, a drill is used an average of 45 hours during its lifetime. If materials are recycled twice, you need roughly three times less raw materials. But if you share a drill, for example using Peerby, you save roughly a factor of five. Because six households can easily use a single drill: five drills will not have to be produced. In Europe, Airbnb claims they produce roughly 0-30% less waste, use 50% less water and emit 90% less CO2 than hotels. On the other hand, they have taken over whole streets from which the residents have moved, thereby negating these positive effects for that area.

An additional benefit of sharing is that most materials cannot be endlessly recycled like glass and metal, but they can be shared. Plastic composites for example often end up in the incinerator after the first use, but as part of the bumper they can be shared amongst users during the lifetime of a car.

Governments elsewhere, however, still see this insufficiently. Last summer, the European Commission was working on the revision of the Services Directive to include sharing platforms. At the same time it worked on the Circular Economy Package – without reference to each other. Commissioner Katainen has fortunately acknowledged this gap on Twitter. To boost the circular economy, it is advisable to promote sharing platforms in general. This is possible through incentives such as producer responsibility, circular public procurement and minimum requirements for circular design.

Governments should regulate and stimulate sharing platforms and stop working against them. New regulation is needed concerning one-time compensation of social coast of, for example, duped taxi drivers, and to address some concerns also connected to sharing platforms. For instance, the business model can lead to economic exploitation of those who share their goods, and it is often still unclear who must pay which taxes.

It would help if the EU would set a target for the percentage of goods shared through sharing platforms, in addition to the targets for recycling. For example, government measures could create a breakthrough for car sharing, which even after 20 years has still not substantially reduced private (unshared) car ownership. Encouragement could also give room to innovations resulting from economies of scale and make them catch on internationally, and give a boost to a sector, such as Airbnb has given a boost to tourism.

It is important that sharing and circularity are connected and that sharing platforms are encouraged. Uber and Airbnb are just the beginning of a sea of opportunities to share.

Arthur ten Wolde is owner of Circular Future, expert Circular Economy for Dutch Sustainable Business association De Groene Zaak, and a member of Cooperative Amsterdam Resilience Collective (Coop ARC). He has worked since 2013 on circular economy as a lobbyist for sustainable businesses and advisor to companies and municipalities, previously as senior consultant sustainability. His focus is on government policies and new business models. He is (co-)author of dozens of publications and frequent speaker in Europe.